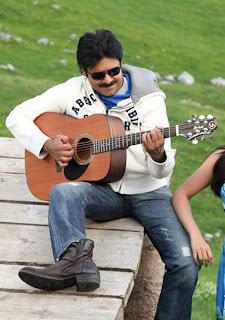 Yes, we are going to have an unreleased song in Atharintiki Dharedhi. Brahmanandham recently confirmed this news in this audio launch which is going to be the highlight of this film. Here is an interesting news about the song.

Its a long lasting dream for DSP to bring back the singer in  PawanKalyan  With a great efforts he tried it for Gabbarsingh and made him to song for two lines for Pilla song. But, AD is going to have a special funny song for which PawanKalyan is going to lend his voice for it as a singer. It is said that  a comedy mass track is added in the movie when Pawan Kalyan appears in Baba getup, in the combination scenes with Brahmanandham.

So, we have to wait for 15 more days to enjoy the fun track from the movie.